If you are running an older version of Address Labels i.e. pre-2.41, or if your Mac is running a version of operating system pre-10.15 (Catalina), then data will not be automatically synced via the Cloud. However, transfers are still possible via Dropbox.

AddressLabels for Mac has been written such that it is possible to transfer iPhone/iPad lists to your Mac, and vice-versa. This is performed using the Dropbox backup/restore feature of the app, similar to the way this feature is often used to transfer lists between iPhone and iPad.

Please note: when transferring lists from one device to another, the existing data is overwritten.

Moving a list from your iPhone/iPad to the Mac app is simple.  First follow the steps in Dropbox Backup/Restore to display the backup table and create a new Backup. 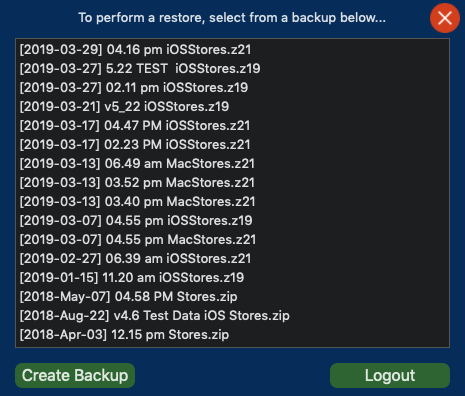 Restoring from a Backup

In the example shown, you will see that some of the backups have a .zip extension, others have .z19 extension, and others a .z21 extension. The .zip files will have been created by the old iOS CardLists app. The .z19 files will have been created by either the iOS AddressLabels v5.22 or by the previous Mac AddressLabels version v1.41. The backups created on an iOS device  will have iOSStores in the name. The ones created on a Mac will have MacStores in the title. The latest versions of the iOS and Mac app will save the file with a .z21 extension.

It is always advised to run the latest version of Address labels (1.50 on Mac, 5.30 on iOS). The latest versions of AddressLabels can cope with all of the zip types. So, simply select  a file, and click the Restore button. You will get a warning about how proceeding will overwrite any existing lists. If you are ok with that – hit OK and restore your list.

Note that if your list uses names from Contacts, and the list was originally created on another device e.g. an iPad, then for the list to look correct (e.g. have correct addresses), you will need to be using the same Contacts on both devices. 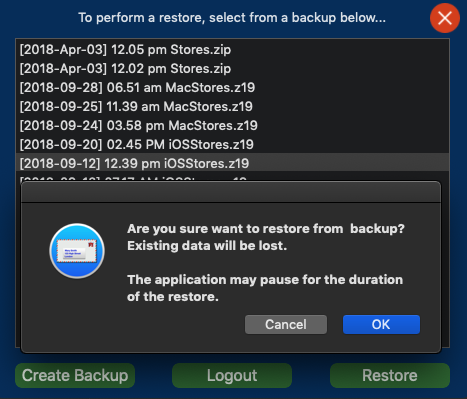 To restore from a Backup, click on it to select it, then click the Restore button.  You will then see a warning saying that your current lists will be overwritten by the backup. If you are happy to go ahead with this, click OK to do the restore.