This mainly applies to pre-2.41 versions, or if your Mac is running an OS before 10.15 (Catalina).  If you are running 2.41 on a Catalina Mac, then your data will be stored on the Cloud and there is no need to do a dropbox backup.

To make a backup, or restore from a backup, click the Dropbox Backup/Restore toolbar button.

After clicking the Dropbox button, the next screen will either be a  Dropbox login screen (if you have not already logged on), or a screen asking for authorisation to access its own folder.

You will have a private folder on your dropbox for storing backup files. You will notice that the folder is called MyCardList, and not AddressLabels. The reason for this is as follows. This Mac app has been written so that the backup/restore files can also be used with the existing iOS app. The iOS app was originally called MyCardList, and hence so was this folder.

When you allow AddressLabels access, you will then be asked to allow “this page to open “AddressLabels.app”. Click allow to allow your browser to return to AddressLabels with the authority to open your backup folder.

Once you have allowed AddressLabels to access your Dropbox folder, you will see a screen listing any existing backup. If this is the first time that you have gone through the above steps, the table will probably be blank. However, if you have created backups previously, in this app, or using the iOS app, they will appear in the table (as long as you are using the same Dropbox login as previously.  To create a new backup, simply click the Create Backup button. After a small delay, you should see a “Successfully Stored backup file” massage. 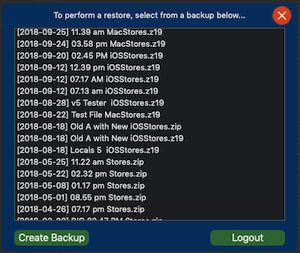