Do you want to use different names on different lists for the same person?

When names are added to lists in AddressLabels, the details for that person are added to Address Labels database. If that same person is then added to a different list, rather than duplicate the information in the database, which would be wasteful, the person’s information is usually stored just once, and each list can then access that information as needed.

This is done for two reasons. Firstly it is more efficient. Secondly, it will mean that changes to the information in one list will also show up for that person in the other list.

The latter however is sometimes not desireable, especially regarding the name which appears on the label. When the name is changed on one list, the same change will appear on the other lists. Whilst this is often what you would want, occasionaly it is not. For example, supposed you add John Smith from contacts to your Golf Club list. You might be happy that “John Smith” appears on the label. Now supposing you also want to add John to your Christmas card list. This time, you want the label to be addressed to John and Mary Smith. With the default setting, changing the name to “John and Mary” on the Christmas card list will then also result in “John and Mary” appearing on the Golf List!

There is a way to stop this happening. With the list selected, tap on the Settings button. 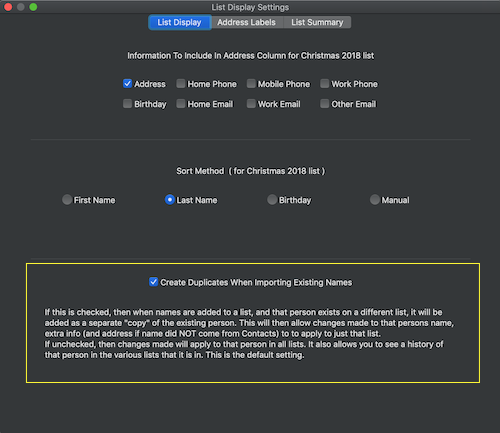 If you change the setting such that the Create Duplicates checkbox is checked, then from then onwards (until it is unchecked again), adding a name, already existing in a different list,  to a list will result in a duplicate of that person being used. Therefore, you can change the name for the person in the list without affecting the neam of that person in the other list.

Note that this will only apply to names added after the checkbox is checked. If you already have a name in two or more lists, and want to have different names for that person, then you will have to remove the person from one of the lists and then re-add to that list.